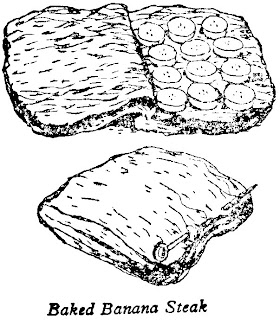 This book was on my mother's kitchen shelf for a very long time, and is now on mine. It was, and apparently still is in its latest incarnation, a comprehensive manual of contemporary domestic cooking technique. So I sometimes take it down and enquire within on this and that. What I find increasingly interesting as the years pass, is not the recipes and basic techniques, but the insights into social history and attitudes. There is for instance the advice on page 65 that, "although most young servants like the idea of waiting at table and are anxious to do it well, it naturally takes much practice to become a deft parlourmaid." We are advised that the after-dinner coffee tray should be placed on a low table - the actual term "coffee table" wouldn't occur in the UK until 1959, according to the OED. There are the imperial echoes provided by a whole chapter on curry making; recipes for Australian Pudding, West Indian Pudding and the like, taking their names from the imagined origin of their ingredients; and the exotic Canton Cream, laced with powdered ginger. This nostalgia trip is augmented by the advertisements discreetly scattered through the back half of the book. New Zealand Lamb is "the meat of sunshine", "the best in the world!" There are brands which are still with us: Cadbury's cocoa, Colman's mustard, and Hovis bread. Others are a mere memory: Miller's baking powder, Brown and Polson's patent cornflour, and Unger's meat soup. Some of these advertisements have what Roland Barthes called a "rhetoric of the image", which now invites dissection: some promise a return to a pre-war version of prosperity, others urge us to press on with refrigerators and electric clocks decorating our fitted kitchens. We are assured at the end of the book's foreword, that if all else fails, we can telephone Sloane 4591, and speak to the staff of the Good Housekeeping Institute.

Times were clearly still tough, in ways that the Good Housekeeping Institute would not be able to remedy. What modern cookbooks have a chapter on Invalid Cookery and a Supplement of Economical Recipes? That one had to worry about patients "whose appetites grow more and more fastidious and powers of digestion feebler" hints that they would not be leaving the premises until they had expired upstairs. Those economical recipes, with their generous quantities of mashed potato tricked out with tinned fish, offal, and powdered egg were to cope with rationing, and "where for any other reason extreme economy must be practised."

Nor must the Banana Problem be forgotten. There is a lively selection of sallies with this unaccustomed ingredient. I shall have to get back to that subject. Meanwhile, Banana Mayonnaise anyone?
Posted by William Avery at 06:28 1 comment: